The men’s Conferences stole a march on the Premiership sides by virtue of playing one more match than them. As a result, Surbiton’s Alan Forsyth moves down from second to third, his place being taken by Cambridge City’s Euan Gilmore.  Forsyth’s place is further threatened by Loughborough Students’ Luke Taylor. Taylor has scored15 goals, the same as Forsyth, but all of Taylor’s goals were from corners.  Richmond’s Charlie Ellison scored once on Saturday, and remains comfortably in the lead.

There was no Investec Women’s League hockey over the weekend, so the table remains unchanged.

NB: Where there is an equality of goals we use the standard convention of giving less value to penalty corners and strokes than field goals.

THE NAUGHTY BOYS’ (AND GIRLS) BRIGADE

With a red card blotting their record, Conference East Oxted head our table, with one red and 13 yellows.  Second place goes to another East side, Teddington, who have clocked up 17 yellows. In third is Canterbury from the Premiership with 14.  Ironically, the division that has five teams on double figures also has the best behaved. Conference East Richmond has received just two yellow cards all season.

As the women did not play over the weekend, we will spare their blushes until our next edition.

The International Hockey Federation (FIH) recently announced its list of awards for 2015. Included is one English player and an English coach.

21 year-old Lily Owsley was a runner-up in the recent Hockey Writers’ Club Awards. She has gone one better by bagging the prestigious FIH Rising Star of the Year Award. Owsley was one of the successful England team that came from behind to beat The Netherlands to win the European Championships in London in the summer.

The Award, which was formerly known as the Young Player of the Year, previously saw Owsley in the list of nominees in 2013.

England Women’s assistant coach, Karen Brown, received the Women’s Coach of the Year Award. A former Chelmsford player and coach, Brown won Olympic bronze with Great Britain in 1992 in Barcelona. As Assistant Coach to England, Brown was part of the team that secured bronze in the 2012 London Oympics, and won the European Championships in 2015.

The full list of FIH Awards was as follows:

OUR CONGRATULATIONS TO ALL THE WINNERS.

NO CHANGE TO MEN’S CONFERENCE LEADERS AS LEAGUE RE-STARTS

There were no matches in the Investec Women’s League or the Men’s Premier Division over the weekend, but there was an almost 100% fixture list in the Men’s Conferences.

Astonishing as it may seem, there are only six Conference matches until the end of the season for most sides. That’s a potential 18 points to be won, or possibly lost.

Although the Conference West remains unchanged after Saturday’s matches, there was no shortage of interesting results.

Cardiff & Met continue to dominate the table, with an increased lead over Bath Buccaneers. Bath came a cropper when they visited Indian Gymkhana, going down 3-1 and increasing the margin to seven points.

Cardiff’s result was a useful 2-3 win over third placed University of Birmingham, although there must have been some nervousness after Birmingham’s Josh Kelly popped in a 59th minute goal to close the gap.

Cheltenham had been standing in second place earlier in the season, but they had not enjoyed a win since 24 October and had slumped to seventh. They may take some heart from a 4-2 home win over Chichester Priory Park. Although they remain in seventh, the mid table is tightly packed and a win could see them move several places up the table.

Chichester are in trouble, but not without hope. They are on six points, three points behind ninth placed Guildford. Guildford lost 2-0 to University of Exeter on Saturday.

Two North sides – University of Durham and Olton & West Warwicks – have a game in hand. They are due to play their postponed match on 6 February, which may shake up the leading positions slightly.

Loughborough Students remain out in the lead, where they have been all season. They met their nearest rivals, Bowdon, on Saturday, when the match ended in a draw thanks to the Students’ Luke Taylor.  Bowdon had held a 2-1 lead since just before the break, but Taylor’s 56th minute penalty corner conversion ended the match at 2-2.

Students are seven points ahead of second placed Bowdon, but Bowdon has University of Durham breathing down its neck.  Durham beat Wakefield 2-1 on Saturday and are one point behind Bowdon. And remember – they have a game in hand.

Lichfield recorded their first win of the season when they beat fellow strugglers Olton & West Warwicks 1-2. The win still leaves Lichfield in bottom place. They play Students this weekend, so they may have to treasure Saturday’s three points for the time being.

Sevenoaks’ appearance in the Indoor Finals meant that their match against Brighton and Hove is postponed until 14 February. This means that one of the challengers for a top place will be a game in hand for two weeks.

Ironically, Sevenoaks moved up one place to third over the weekend without touching a ball, at least outdoors.  Cambridge City lost 4-2 to West Herts and drop behind Sevenoaks on goal difference.

Richmond retain their number one spot after a win over struggling Bromley and Beckenham. The usual suspects, Charlie Ellison and Mark Pearn, each scored in their 2-1 home win.

Southgate had a bit if a goalfest at home to bottom-placed Harleston Magpies. Jonty Robinson scored a hat-trick in their 6-1 win over Magpies.

Remarkable goings-on at Teddington, where Oxted’s Robbert Schenk found the goal three times in four minutes to put his side 1-3 ahead, only to see them lose 6-4. Schenk also scored Oxted fourth goal, all of them coming from corners. 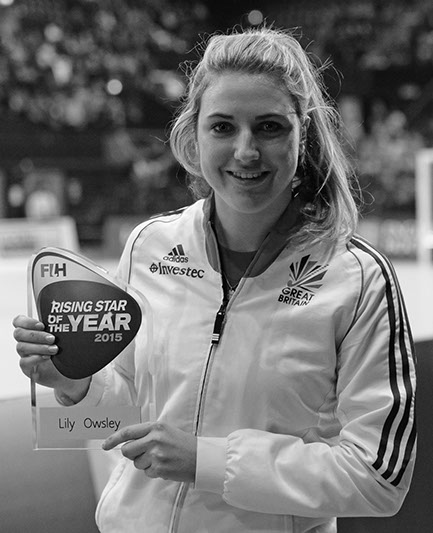 Worlds by Antonia Richards from
the Wembley Arena

The Super 6s Finals Day at Wembley provided a noteworthy landmark as East Grinstead became the first club in the tournament’s history to see both their men and women lift the winners’ trophies.

EG’s women had won their semi against Bowdon Hightown 1-0, and their opponents in the final, Canterbury, had beaten University of Birmingham by 4-2.

In the men’s semis, East Grinstead lost the lead against Sevenoaks at one point, eventually clinching victory 6-3.  Canterbury galloped into the final with a 6-9 win over Reading.

The women’s final had moments of drama with brilliant goalkeeping and a shot coming off the metalwork.

A field goal by EG’s Malou Pheninckx (who had scored two in the semi) put them ahead 0-1 at half time.  Sarah Kerly equalised for Canterbury, and the noise from the crowd was deafening!  EG took full advantage of a penalty corner by Takara Haines to edge ahead 1-2.  Canterbury were unable to take opportunities, and EG sealed their 1-3 win with another Pheninckx flier in the last minute.

The barnstorming way in which Canterbury had seen off Reading meant that the sixth match of the day promised a real thriller.

EG were ahead at half time 2-1 (Simon Faulkner and Ross Stott for EG and Liam Foster for Canterbury), and then came a further three field goals (David Condon 2, Josh Coniglio 1).  Canterbury had five penalty corners in the match which they were unable to convert, with one of the shots hitting the crossbar.

The 5-1 scoreline is a harsh one and does not reflect the part Canterbury played in the match.

COVERAGE OF THE INDOOR FINALS IS A MAJOR COMMITMENT FOR US AND SO WE ARE SLIGHTLY DELAYED IN GETTING OUR PHOTOGRAPHS FROM THE FINALS UPLOADED. CHECK OUT OUR PICTURES PAGES FROM TIME TO TIME TO SEE THE LATEST. 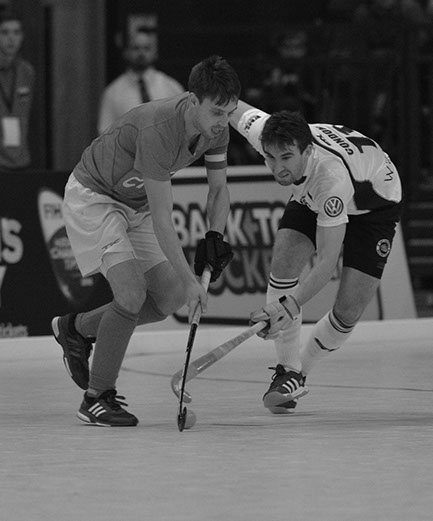 Winner of the Outstanding Goal of the Finals Champagne and the
scorer of two of East Grinstead’s goals in the final, David Condon
(right) moves in to tackle Canterbury’s Tom Richford 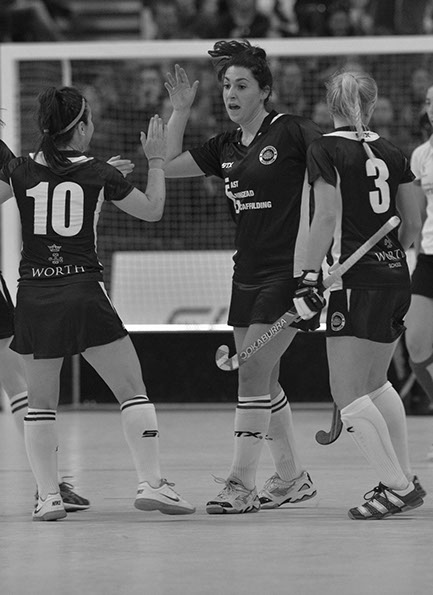 CRUCIAL GAMES AHEAD FOR CLUBS BATTLING FOR CHAMPIONSHIP PLAY-OFF PACES

The neck and neck battle at the top of the Men’s Premiership sees Surbiton playing host to Brooklands, whilst Holcombe are at home to Wimbledon.  The two leading sides are currently only split on goal difference and, with that difference being only two goals, goals we could see a change at the top.

Both Wimbledon and Brooklands will be looking for good results too. Wimbledon are in the fourth play-off place, two points ahead of Brooklands MU.

With seven matches left to play until the end of the season, Canterbury will have to repeat last season’s trick which saw them make a last gasp escape from relegation. They play Hampstead & Westminster, who are one of four clubs in danger of playing in the relegation play-offs.  East Grinstead, H&W, Beeston, and Cannock are only separated by two points, with Cannock currently in ninth.  East Grinstead will play Cannock on Saturday.

Saturday provides a top-of-the-table clash when Birmingham University play second-placed Surbiton at home.  There are two points between them.  If Surbiton  lose they will be checking out the result between third placed Canterbury and ninth placed Bowdon Hightown. Canterbury are three points behind Surbiton, although the goal difference margin (+7) favours Surbiton.

The competition for the fourth play-off spot is tight. It is currently held by East Grinstead, who will be played fifth placed Clifton on Saturday.  There is only one point between them.

Holcombe have a realistic chance of moving back into contention. They are in fifth place, two points behind East Grinstead.  They are playing Leicester, who have serious relegation problems.

Buckingham are five points adrift at the bottom of the table, having not won a game all season. They play Reading, who are not having a good season, but are in seventh place and nine points ahead of them.