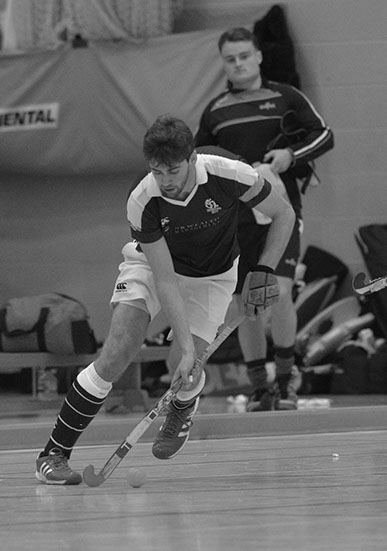 After completion of two weekends of play, Surbiton and Bath Buccaneers are promoted to the Super 6s Premier Division next season. But it was a close run thing.

Surbiton maintained a 100% record until they played their final game, which was against their promotion rivals Bath. Buccaneers stormed ahead in the first half, with goals from Ben Mackey, Ben Stone and Toby Vaughan giving them a 3-0 lead. Surbiton’s David Becket scored early in the second half, but Mackey scored a second to maintain the margin.

The final goal of the match, scored by Becket, ended the match at 4-2 to Bath. Bath’s win reduced Surbiton’s lead at the head of the table to one point.

Bath, who were the only undefeated team in the competition, were closely chased by Brooklands, who took seven points from their last four matches.  They only dropped points to Bath Buccaneers (3-3 draw) and Surbiton (5-7 defeat).

West Herts had made a promising start to their league campaign, having started the second weekend in third position. Although their final four matches saw them earn six points, including a 4-11 win over Sheffield Hallam, they had dropped back to fourth by end of Saturday. They did, however, have the distinction of having their Dan Webster as the highest scoring player in Division One.

It was a sad weekend for Old Loughtonians, who were one of three sides on six points. They finished in eighth place, on the same goal difference as seventh placed Sheffield Hallam. The decider was Hallam’s greater tally of goals scored.

OLs will be playing their indoor hockey in Division Two next season, where they will be joined by bottom placed Doncaster. Doncaster’s only win of the competition had been against OLs during the first weekend.

For both Surbiton and Bath Buccaneers it will be an immediate return to the Premier Division after an absence of one season. In 2015 Surbiton had finished bottom, with only one win in eight games. Bath Buccaneers were relegated from eighth place. Surbiton’s only win that season had been against Bath.

As reported last week, the places of Surbiton and Bath will be taken by Beeston and Holcombe, both of whom were relegated from the Premier Division last weekend.  Division Two matches are played next weekend, the top two being promoted to Division One.

Full results from Bristol can be found elsewhere in this edition.

Holcombe and Buckingham are promoted to Premier Division. Wakefield and Olton & West Warwicks are relegated to Division Two.

Surbiton and Bath Buccaneers are promoted to Premier Division. Old Loughtonians and Doncaster are relegated to Division Two.

Whilst a depleted Holcombe men’s side had struggled – and ultimately failed – to avoid relegation from the Premier Division, the club will have their women’s side playing in the top flight indoors next season. Holcombe women won Division One last weekend, finishing one point ahead of second placed Buckingham.  Both will play their indoor hockey in the Premier Division next season.

Holcombe had enjoyed what was almost a 100% record. Their only dropped points was when they drew their match against Harleston Magpies during the first weekend. Harleston, who finished the competition in sixth place, had come back from 2-0 down to even the score.

Holcombe’s promotion is a significant achievement for the club. Last season their women were playing in Division Two.

Buckingham, a club that has not enjoyed much success outdoors in the Premiership in the last two seasons, only suffered one defeat during their indoor campaign. Inevitably it was against Holcombe. Buckingham had enjoyed a 2-1 lead in this match but Leigh Maasdorp (2) and Kim Leiper had found the net to give Holcombe a 2-4 win.

Buckingham finished three points ahead of Clifton in third place.

Luckless Olton & West Warwicks is relegated, having not won a match in eight matches. Their only point came from a draw against Wakefield, who are also relegated. Wakefield managed to muster two points during the competition, the other draw being against Firebrands.

Promoted Holcombe and Buckingham’s places in Division One will be taken by relegated Leicester and Surbiton.  We will have to wait until next weekend to find out who has been promoted from Division Two.

Full results and tables and elsewhere in this edition.

Most readers will be familiar with the national Super 6s indoor format but, if you are new to indoor hockey, this is how it works. (This guide applies to both men’s and women’s hockey.)

The Premier Division and Division One each consist of nine teams, and matches are played over two weekends. Each team plays a total of eight matches.

The top four teams in the Premier Division go forward to play in the finals at Wembley Arena.  The bottom two teams are relegated to Division One.

The top two teams in Division One are promoted to the Premier Division. The bottom two teams are relegated to Division Two.

Playing in the second-tier European Indoor Championships (II) in Espinho, Portugal, England was robbed of promotion to the full Championships in the cruellest of ways.

England had fought their way back from 3-5 down in their crucial final match of the tournament against Denmark, thanks to penalty corner conversions from Ed Horler and Luke Taylor. But an overtime penalty corner for Denmark gave the Danes the winning goal, leaving England in third place overall, and missing out on promotion.

England had not got off to a particularly good start in the competition when they drew their opening Pool A match against Scotland 2-2. England’s scorers were Tom Carson and John Kinder. England then played France, and were heading for another draw when Carson scored the winner in the closing minute.

Finishing Pool A in top place, one point ahead of France, England then went forward to play in the promotion pool (Pool C), along with Belgium and Denmark.

England’s first promotion pool match, against Belgium, saw them struggle despite a long period in the first half when they were 2-1 ahead. But the Belgians piled on the pressure and England found themselves 2-5 behind with ten minutes to play. Kinder and Horler scored from penalty corners to reduce the margin to 4-5, but that is how the match ended.

The competition was won by Belgium, with Denmark taking the runners-up place. Both will be playing in the full Championships in 2018.  Croatia finished seventh, with Scotland bottom. They will play in Championships III when it is next played in 2018.

England’s squad had a slightly German look to it with Brendan Creed, George Farrant and David Goodfield all being Harvestehuder players. Even Wimbledon’s Ritchie Dawson-Smith has had a spell with the German club. Other squad members were; James Alberry (Beeston), Ed Horler, Toby Reynold-Cotterill and Luke Taylor (all Loughborough Students), Tom Carson and Chris Newman (both Reading), Johnny Kinder (Wimbledon) and Paddy Smith (East Grinstead).  The team was coached by Andy Halliday, with Kwan Browne as assistant coach.

The top tier European Championships was won by Germany. 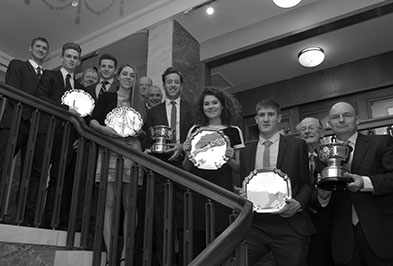 The Hockey Writers’ Club Annual Awards are being held in London on Wednesday 20 January 2016.  We’ll have details of all the winners in our next edition, but photographs from the Awards should be in our Pictures pages from Thursday 21 January.